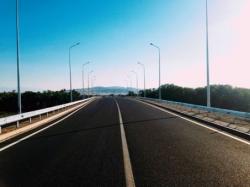 The length of the corridor through the territory of Kazakhstan is 2 787 km, of which 2 452 km is subject to reconstruction. Main part of corridor is financed at the expense of International Finanacial Institutions (IBRD, EBRD, ADB, IDB and JICA).

During 2009-2015 period of project implementation of “Western Europe – Western China” international transit corridor the road with the length of 2028 km was opened to traffic from the border of Russian Federation to Shymkent city through Aktobe, Kyzylorda and South Kazakhstan regions.

According to the results of the last year 74,4 bln. KZT was disbursed under “Western Europe – Western China” project and at the expense of which the traffic was open in 144 km.

“Western Europe – Western China” transport corridor will be completed and fully operate at the end of 2016 after construction completion of “Nur Zholy” cross border controls ath the State border with China.