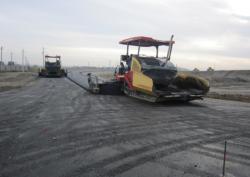 The Government of the Republic of Kazakhstan through the Ministry of Investment and Development is implementing the ambitious programme of Rehabilitation and Upgradation of road corridor from China to Russia through Almaty , Shymkent , Kyzylorda and Aktobe (Western Europe-Western China Corridor) about 2787 km long. The proposed project is being implemented by Government along with International Financial Institution (the IFI’s) as South West Roads Project under the following component of the World Bank.

Component 1: Upgrade and reconstruction of road sections within Kzylorda oblast in 14 Lots/Contracts (excluding the bypass to Kzylorda) and Aktobe oblast.

The length of this section of road is about 812 km in Kyzylorda Oblast with a modern structural design, including road safety to lower the life cycle cost of the asset.

Component 2: Upgrade and Reconstruction of road sections within South Kazakhstan Oblast. All of them have been completed and passed the defects Liability Period providing the passage.

The European Bank for Reconstruction and Development (EBRD) and Govt. of Republic of Kazakhstan is financing Upgradation and Reconstruction of Russian Federation Border – Martuk- Aktobe section of length 102km. This road section has been completed and passed the Defects Liability Period.

The Tashkent- Shymkent-Zhambyl region border section of length 182 km is being Upgrading and Reconstruction of financed by ADB, EBRD and WB and expected to be completed in 2016.

The section from South Kazakhstan region border to Taraz of length 56 km completed and financed by Islamic Development Bank Govt. of Republic of Kazakhstan.

Taraz-korday-Almaty section of length 439 km is financed by Asian Development Bank, JICA and Govt. of Republic of Kazakhstan

Almaty – Khorgos Section of length 304km has been now under Upgrading  and Reconstruction being financed by World Bank under East West Road Projects.

The Contracts in Kyzylorda Oblast under Component 1, have commenced in January 2010 and the date of completion of the 14 lots were in September 2013. Except, Lots 9, 12, 13 & 14, most of them have been completed in 2014. The lot 7 which was terminated the contract and retendered in 2013 has not yet been fully completed with respect to the shoulder strengthening, guardrails, road sign, markings etc., now in progress and expected to be completed in July 2016.

Some of the finishing works of the road section, Lot 7 are shown below:

The full completion of the Contract is expected to be completed in July 2016.

The Contract will be expected to be completed in July 2016.

The ongoing construction status of the Shymkent – Tashkent Road and Almaty –Khorgos Roads will be presented in next news.