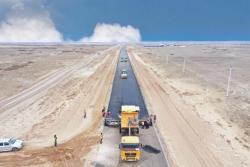 During his working trip to Atyrau Oblast, Deputy Prime Minister of the Republic of Kazakhstan Roman Sklyar reviewed the progress of the Atyrau-Astrakhan road reconstruction project. Akim of Atyrau oblast Makhambet Dosmukhambetov, the Chairman of the Committee for Roads of the MIID RK Sairanbek Barmakov, the Chairman of the Board of NC KazAutoZhol Ulan Alipov, and representatives of the Contractors also took part in this visit.

To date, the construction works on the Atyrau-Astrakhan road is being carried out according to the plan.

The length of the reconstruction sections of Aktobe - Atyrau – border of RF (to Astrakhan) in the Atyrau region is 277 km. The road is divided into 6 sections, the works on which are carried out by the companies of Cine Midas Stroy, Todini Costruzioni Generali S.p.A., and Ant Insaat Maden Sanyi A.S. This year, it is planned to open 60 km traffic on the road sections km 833-853 and 853-893. 12 bridges have already been completed by 50% and 22 culverts constructed at these sites. Preparatory works have started for construction of a bypass road, preparation of road construction materials, and the earthworks at ​​km 648-693 section.

After reconstruction, the road will be transferred from III to II Category. Now the project involves 740 Nos. of Personnel and 550 Nos. of Equipment.