Home > Press-centre > News > Almaz Idyrysov: The construction of “Karaganda-Balkhash” road is under special control of the ministry
News 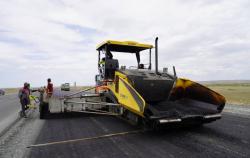 Almaz Idyrysov: The construction of “Karaganda-Balkhash” road is under special control of the ministry

Vice Minister of Industry and Infrastructure Development of the Republic of Kazakhstan Almaz Idyrysov continues to inspect the construction of roads of national importance. Thus, a working trip of the vice minister to the Karaganda region took place, where the road construction work of the republican network “Karaganda-Balkhash” was resumed. The total length of the route is 363 km, it consists of 8 sections. This road is covered by a full range of works.

“Karaganda-Balkhash” road is located between two cities of republican significance. It unites our capital with the Almaty oblast. There is a high intensity here, about 9 thousand vehicles move along this road per day. Accordingly, the construction of this route is under the special control of our ministry. From the very beginning of the road construction season, work has been resumed at all 8 sections. In addition, the composition of the construction consortium was revised. The main contractor is faced with the task of providing access to most of this road. It is important to increase the pace of construction. So, in order to increase the pace of work, he ordered to attract an additional number of subcontractors. Until the end of the road construction season, the ministry will continue to inspect the construction of republican highways,” said Almaz Idyrysov, Vice Minister of Industry and Infrastructure Development of the Republic of Kazakhstan.

Particular attention is paid to reducing the number of bypass roads and sections where traffic is carried out on the embankment.

“To date, the road builders have laid about 45 km of asphalt of the lower layer of the pavement. The sites provide all the necessary resources for construction and installation works. Thus, 700 personnel and 362 units of special technique are involved. Also, contractors involved five asphalt concrete plants, about ten soil mixing and concrete mixing plants,” said Syrym Khamzin, head of Karaganda oblast branch of JSC “NC “KazAvtoZhol”.

After completion of the reconstruction works, the route will correspond to the I technical category with four traffic lanes. The deadline for completion of construction in accordance with the terms of the contract is provided for at the end of 2023.