Home > Press-centre > News > The number of bypass roads on “Karaganda-Balkhash” road has decreased by 94%.
News 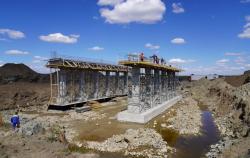 The number of bypass roads on “Karaganda-Balkhash” road has decreased by 94%.

As part of the current road construction season, “Karaganda-Balkhash” road of republican significance with a total length of 363 km has been covered by full-scale work. Construction work is underway on all 8 sections of this route. A step-by-step action plan has been developed for each section, and a work schedule has been approved. Thus, this year the number of bypass roads decreased by 94%. More than 70 km of asphalt have been laid, and the construction of large artificial structures is also being intensively carried out.

“Previously, the total length of bypass roads was 148 km, now there are only 9 km left. The remaining bypass roads are planned to be eliminated by the end of this year. In addition, work was carried out on the most unsatisfactory section between Kyzylkoi and Nurataldy villages. There are two lanes open to traffic. We carry out work in three main areas: we are eliminating bypass roads, we are continuing work on the construction of bridges and cattle passes, and, of course, we are laying asphalt. At the moment, passage is provided for 260 km. Full completion of work under the terms of the contract is scheduled for the end of 2023,” said Syrym Khamzin, head of Karaganda regional branch of “NC “KazAvtoZhol” JSC.

The project provides for the construction of 46 large artificial structures (cattle passes, overpasses, traffic interchanges and bridges) - at the moment, work has been completed by 65%.

According to the head of Karaganda regional branch of “NC “KazAvtoZhol” JSC, 19 rest areas have been prepared in the region for the further development of roadside service facilities. These sites are potential places for “roadsides”. After completion of construction works, 3 roadside service facilities of category A and B will be located along “Karaganda-Balkhash” road every 100-150 km.

It should be reminded that the composition of the construction consortium of this road facility has been revised. Construction work is continued by the general contractor - CITIC Construction.