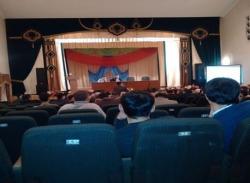 During 9 to 11 November 2015 second public hearings were held under “Astana – Arkalyk – Torgai – Irgiz” road construction within the framework of “Center – West” corridor development project financed by funds of International Bank for Reconstruction and Development (hereinafter – IBRD).

Reprsentatives of designer “Jupiter” LLP, Committee for Roads MID RoK, Project Management Consultant “KazDorNII/Sapa SZ” as well as representatives of local authority took the floor and answered to the questions of attendants.

Attendants noted the importance of road development for improvement of population prosperity, as well as increase the traffic reliability and safety in districts.

In conclusion it was noted that consultations with the population will be continued throughout the design stage of road.